Amsterdam is famous for its tolerant and open atmosphere. It was one of the first cities with an extensive and open gay scene and the first to have a gay monument. Amsterdam is small and has to compete with other cities but it has still many gay bars and clubs.

In recent years Amsterdam has become an all year round busy tourist destination. The best place to stay is the city centre, so you are able to walk everything day and night. But the city centre comes at a price. Because of new regulations, all new hotels have to be build outside the city centre.

Nearby is the Amstel area and Halvemaansteeg, with bars popular by the locals. In the Kerkstraat you find popular the popular gay club Church, with many fetish theme nights.

Warmoesstraat & Zeedijk The other area is located near Dam square. Behind Dam square you find popular bar Prik on Spuistraat. Close-by are 2 cruise bars Web and Cuckoos Nest.

On the Warmoesstraat you find the leather scene and gay bars for 'real men'. Connected to it is the Zeedijk, with another gay bar, Cafe the Queen's Head. Both areas are at walking distance of each other.

Amsterdam has a couple of weekly gay clubs and a wide range of popular monthly dance parties. The weekly gay minded club is Club Nyx (in the main gay street) . The most famous parties are Rapido (4 times a year) and Bear Necessity (muscle bears) And Funhouse.

Amsterdam is also known for its dark and sleazy places. As a tourist your probably don't want to miss the popular Sauna NZ. A popular fetish place with different theme parties is Club Church. The other cruise bars are located around Warmoesstraat: Eagle and Dirty Dicks. Already from afternoon you can visit The Web or Cuckoo' s Nest. 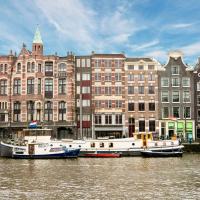