Amsterdam has quite a lot gay bars.  Most places are open all week, but most of them only get real busy in weekends. All bars are located in city center, on walking distance. A very nice place to start your evening is bar Prik, close to Dam square. End of evening bars Taboo and Soho get busy.

“Popular gay and lesbian bar, you can easily bring str8 friends too”

Prik is a very popular gay bar on the Spuistraat (behind Royal Palace). The bar has been voted best gay bar of The Netherlands in several years more...

Soho is one of the main gay bars in Amsterdam, located in the hearth of the gay street,  Reguliersdwarsstraat more...

Taboo bar is one of the most popular gay bars in Amsterdam. It's located in the Reguliersdwarsstraat, the main gay street more...

Amstel Fifty-Four is located on the Amstel river, not surprisingly at number 54. In the bar they play music from the pop charts, Eurovision, some Dutch music more...

Bar Blend is a new gay bar in the Reguliersdwarsstraat (also known as the gay street) in Amsterdam.

Taboo Kantine is the sister bar of Taboo bar. They share the same terrace in Reguliersdwarsstraat, the gay street of Amsterdam more...

Fame is a small gay bar at the Amstel area. Mostly a younger crowd. They play all the latest hits and party until late every day more...

Montmartre is small, crowded and noisy but fun. Dutch songs mixed with dance classics, Kylie with ABBA, hysterical guys mixed with old fags and Dutch celebs; everything you expect from a gay bar more...

“Gay/Mixed bar with a tropical flavour”

Reality is a gay bar with tropical flavour. It's located in the gay street Reguliersdwarsstraat, but on the other side of it, near Rembrandtplein more...

Saarein is a mixed gay cafe, but with a strong lesbian accent. Different theme nights attract a mixed audience.

Spijker is a gay bar with a local crowd. The bar is well known for it's pool table. The bar is very cosy with a fireplace, fresh flowers on the bar and two TV's, one showing cartoons and the other showing hardcore gay action movies :-) Upstairs you'll find the toilets more...

Cafe The Queen's Head is a popular gay bar on the Zeedijk, very close to Central Station. The decor is very traditional and camp more...

Lellebel is a very small drag bar on the corner of the Rembrandtplein. This bar has a night licence and is usually popular with all sorts of people (and drags more...

The gay dance clubs in Amsterdam are not very big, but there is a wide range of gay dance parties, from techno, to popular, underground or disco tunes. Most popular club is Church, which has mostly fetish and underwear nights, but also regular dance nights.. The other club is NYX in Reguliersdwarsstraat which attracts mostly a young crowd, and a lot of straights. Every month there are several parties in other clubs. Most famous are Funhouse, Bear Necessity and Rapido.

Below is a list of all gay parties happening in Amsterdam, some of those are on only once a year. Check our gay party agenda to see what's on in Amsterdam when you are there.

Club Yolo is a small gay nightclub on Amstel. It's open in the weekend and gets going quite late. Usually when other gay bars in the neighbourhood are about to close more...

Club NyX is a gay minded club in the famous Reguliersdwarsstraat Amsterdam. The club attracts a young audience, many are gay but str8 are also welcome more... 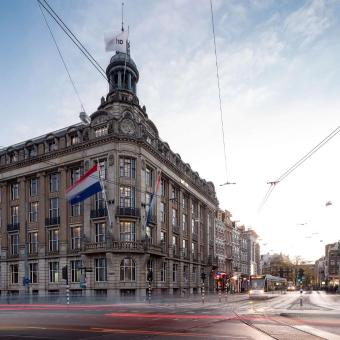