The gay beach in Gran Canaria is located behind the dunes of Playa del Ingles/ Maspalomas. The beach is clothing optional. Chairs and umbrellas are for rent. On busy days they are occupied early. The small beach bar Kiosko 7 is a very popular hangout.

Sometime the wind can be strong, which makes the stay less pleasant, mostly because of the volcanic sand. Then the guys often move to the dunes for sunbathing (and maybe a little cruising too..)

How to get to the Maspalomas gay beach?

You can take a nice walk through the beautiful dunes from the Riu Palace Hotel at the end of Av. de Tirajana.  The path starts at the hotel gate.  It's about a 30 minute walk with a few hills up and down. On your right is the famous gay cruising area. The gay beach is at Kiosko 7 with the rainbow flag.

How to get to the Maspalomas gay beach by taxi

You can also take a taxi to Faro, the lighthouse in Maspalomas. It's still about 20 minute walk but not on loose sand and no up and down on the hills. The beach bars have numbers, the gay beach is at Kiosko 7

After the beach traditions

A at must do is Cafe Wien. This is a very popular gay hangout after the beach, guys go for wines and cakes on the large terrace, in the back of the (for the rest ugly) Cita shopping center.

The other very popular after beach place is the Strandapotheke. This small beach club at the Faro lighthouse is packed after the beach. They mostly play German and Dutch party songs, and serve high carbs bar food.

For some after beach action take the walking route through the dunes, and go to the left. The dunes can be very crowded after the beach.

something not right about this information?
send us feedback 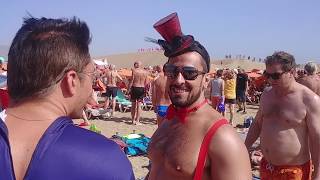