Very popular gay sauna by Le Depot, Paris famous cruising club. With 2000 sq meters currently the biggest in town. Three levels in Indian inspired decoration, with several sauna's, a 3 room steam bath, cabins, videos and gym room where guys work out in their underwear or in a towel more...

Gym Louvre offers 1400 sq meters of male fun. Half decent gym to pump up those muscles, other half is dedicated to another kind of pumping: large steam bath, dry sauna, cabins and a video room more...

Big gay sauna near Gare du Nord. Three levels with dry sauna and a steam room, pool and a gym.

One of the few gay saunas in Paris which are open all night. Situated in the  17th arrondissement.

If you're up for something different, how about this? Atlantide is a sauna not only for gay guys but also open to women, bi-sexuals, straight guys, transsexuals and drags more...

Once one of the oldest public bath houses in Paris, now a 4 floor gay sauna with wet zone downstairs and cubicles and darkroom upstairs more... 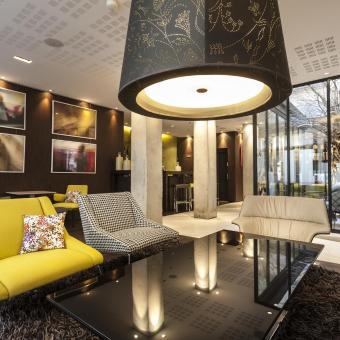