Gay Mardi Gras at New Orleans is a gay carnival festival in the famous French Quarter. Mardi Gras day or Fat Tuesday is the traditional day for masking. Costumes can be more than revealing and as it tradition that women show their tits for beans, the (gay) guys show tend to show the content of their underwear.

The lower French Quarter is the center for Gay Mardi Gras. This is where you'll find the more extravagant costumes. People come from all over the world just to strut around in costumes of their own design. Of course, going home with a prestigious Bourbon Street Award is often the motivation for their sequined madness.

Although parades roll for weeks before Fat Tuesday, on the Day of Days - parades begin early in the morning with the ever popular Zulu and don't stop until the last float passes late in the night. The highlight of the parades is the toast between the King of Carnival - Rex - and the mayor of New Orleans. This is the official proclamation and beginning of Mardi Gras. (source: gaymardigras.com)

something not right about this information?
send us feedback
Updated: 13 Apr 2022 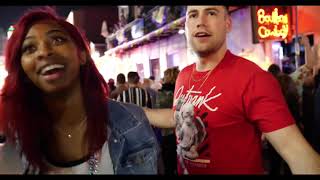