The venue has a large main hall, with 2 rows of balcony's, in the upper balcony sometimes it gets a bit hot (...) On the first floor there is a smokers room and second dance room, and in the basement the bathrooms and a lounge area with snacks.

Guys from all over Europe come to one of the most prettiest venues in town to dance all afternoon and evening to the beats by international DJ's and enjoy the shows and lasers.

It's mostly male guys, almost all take of their shirts, and many wear just sport shorts. It can get really hot and sweaty.

Book your hotel early, to get one close to the venue at a good price.
See our hotel page.

Paradiso is a music venue in the city centre of Amsterdam at Leidseplein. The building is an old church.  It is mostly used for music concerts, but sometimes (gay) parties take place here, like Rapido and F*NG Pop Queers.

Maximum capacity is about 1500 people. The large main room has 2 balconies. A smaller room is on the 1st floor and in the basement there is a chill out zone with food service.
Toilets are in the basement too. Lockers can be found on ground and first floor.

something not right about this information?
send us feedback 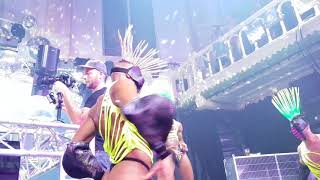 Find a hotel near Rapido